You Snooze, You Lose: Drowsy Driving 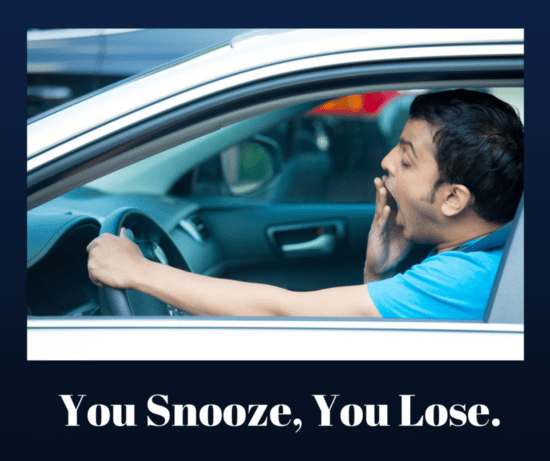 Most of us realize how dangerous driving under the influence or texting, while driving is, but driving while drowsy, can be equally dangerous. Sleepiness can cause slower reaction times, blurred vision, lapses in judgment, and delays in processing information.

Before launching into your vacation, please consider the potential impact of driving while exhausted on your own safety, your family, and other drivers sharing the road with you.

Microsleep While Driving Has Become a National Health Problem:

With over 1,550 fatalities and 76,000 nonfatal injuries occurring annually in the United States alone as a result of drowsy driving, sleep loss has become a public health problem.

When experiencing microsleeps while driving an automobile, from the perspective of the driver, he or she drives a car, and then suddenly realizes that several seconds have passed by unnoticed. It is not obvious to the driver that he or she was asleep during those missing seconds, although this is in fact what happened. The sleeping driver is at very high risk for having an accident during a microsleep episode.

Fast Facts About Driving While Fatigued:

Tips for not becoming a Drowsy Driver Accident Statistic:

Warning Signs That it is Time to Pull Over: