Morgantown WV man tells his story about his initial impressions after waking from a coma after a pedestrian/car accident to give hope to those individuals and families working through the recovery process after a brain injury.

When I became consciously aware, or when I “woke up,” it was as if a curtain had been lifted from before my eyes, revealing to me the brutal reality of my condition, and a deep feeling of dread suddenly impressed itself upon my soul. Something seemed amiss, but the thing about it that bothered me the most was I had no idea what exactly was out of place.

Now, with complete clarity of mind, it dawned on me that I was seated at a wooden table covered in a glossy tan finish, and despite the fact that I was not sitting alone, I had never before felt as lonesome as I then did. A broad Latino woman, whom I did not recognize, was adorned in a full head of healthy-looking hair only a few shades short of jet black and was contentedly seated in the chair opposite my own. She had been babbling on about something, but, other than a few words here and there, it was unintelligible to me due to the speed with which she spoke and her thick accent. Her voice possessed an almost-musical quality, which was pleasant to my ears, so I allowed her to continue.

After a short time of active listening-perhaps a minute or so-I judged by the tone she used and the way she kept looking at me, because I still could not quite make sense of her words, that she was talking directly to me. This came as somewhat of a shock. She was very animated and happy and kept laughing like we were best buddies, but I had never seen her before. On the table in front of her sat a faded red tray filled with supposedly edible globs of assorted colored substances resembling mashed potatoes, which looked equally as inviting as my situation. I was glad that I had enough dignity for myself to refuse such a pathetic excuse for a meal. Before I could react, she reached across the table and pressed a hearty spoon-full against my lips. What was wrong with this lady? Did she think I was some kind of incompetent idiot? Well, she was gravely mistaken.

I am an able bodied twelve-year-old young man! This is outrageous!I was not going to put up with it any longer! I gave her a good verbal scolding, but she did not seem to notice at all. This was puzzling, as I could not figure out why I had been so rudely ignored, until it came to me. I did not hear myself speaking. My voice was gone. I am not talking about the raspy growl that taints the sound of one’s voice after cheering on one’s team during an intense football game. There was nothing left of my voice at all! I tried to push my chair back from beneath the table and stand upright to retreat from the room. In complete and utter rebellion, my arms refused, and I could not even feel my legs!

When I looked down to make sure my lower extremities were still a present part of my person, I discovered I was not in the hard wooden chair I had expected at all, but rather I had been strapped into a wheel chair! Feeling utterly helpless, I franticly searched the unfamiliar room with my eyes darting-from corner to corner; couch to couch-all about for my family. I even looked through the long line of windows five feet above the floor that sat in the walls between the room and the hallways circling it. Other than the jolly woman and me though, both the room and the hallways were completely deserted. No one, not even a stranger was present to ease my troubled mind while my heart was being slowly smothered beneath the weight of my soul.

I felt sick, sick to the point of vomiting. Abandoned by my own family…how could they? Holding back the wells of tears that threatened to overflow their sockets and run down my then boney face, I forced myself to think. Think and be still. The imaginings I had were so morbid, so terrible I dare not write them down. I will say this, though; I was a twelve year old boy with an overactive imagination. Nothing, nothing at all, was impossible….

I can see it all now. I remember the whole day. Everything I did, everything I saw, has been etched permanently on my memory. It was the evening of September 24, 2005, and I was attending a harvest party. After spending time at a barbeque and playing football, the party was riding in two large hay wagons pulled by tractors a few miles to another house for a bon fire.

I jumped from the safety of the hay, and the last thing I remember is drifting down from the wagon through the air. I do not recall my feet ever hitting the ground. I was not aware of the dip in the road concealing the small speeding vehicle. The car, driving much too fast, hit me at seventy-two miles per hour! I was thrown fifteen feet vertically into the air and eighty feet further down the way where I landed on my head in the middle of the road.

After being rushed to the emergency room, the doctors at the local hospital realized they were not equipped to treat a patient who had received a traumatic brain injury as severe as my own. The medical staff could do nothing to help me, and rather than leaving me lie on a stretcher to slowly die a terribly tragic death as the doctors and nurses floundered about with no real hope of saving my life, they loaded me into an emergency medical helicopter. I was flown to a much larger hospital further south that specialized in brain trauma.

Initially, I was given no chance of living. One faithless doctor even confronted my mother after my father and she told him that they were praying for a full recovery. “This is not Hollywood,” he said, “and in real life people don’t recover from things like this.” Logically, the way “The Hollywood Doctor”-the name we affectionately attached to this man-was approaching my case, he believed I should not have been living. The thing about faith is it does not have to be logical because sometimes there is no conceivable explanation, one must merely believe. God knew what was happening to me. Because of the devastating effects of the brain trauma, I “forgot” how to use all of my voluntary muscles and had to retrain them. I had to force my body to perform the simplest of actions, and just touching the tips of my fingers to the thumb on the very same hand was of great difficulty. The process of retraining my limbs and each of my extremities was extremely difficult and painful, so that, no matter how significant the action, it threatened to topple my resolve.

At the time of disclosure, the knowledge of my loss of the physical superiority that I was accustomed to was hardest on me because up to that point, in my little world, I had always been the best at physical sports. Basketball was my game, and one would think my knowing that being phenomenal was no longer an option would discourage me to the point where I would have given up because I knew that even if I recovered, and I believed I could, I would still never be as great as I once was. I determined that I would work hard and get as close to the excellence I had the potential to reach as I could.

The damage from the car is on the left side of my brain, which is the analytical side, thus my difficulty comprehending mathematical concepts. I like to think that the right side, the analogical side, boosted its productivity in attempt to make up for the former. That would explain my sudden increase in creativity.

I was hospitalized for a total of only fourteen weeks. I went to three different kinds of therapy at least twice a week, but usually more often than that, for a couple years following my release from Mary Free Bed Rehabilitation Hospital in Grand Rapids, Michigan.

There are no words to accurately describe the gratitude I feel just to be alive! I developed a deep appreciation for the things that seem as though they are no big deal. Every word I speak is a privilege. Every step I take I now see as a step that was given to me. Every time a turn my head to see or lift my arm to scratch my nose or wiggle my toes, I remember that I am a miracle. Try as I may, I can never explain the emotions I felt; I can never relate the thoughts of my imagination. The pressure on me, from my own mind, to give in, because my body will never reach the level of near-perfection it once held, and be below average is overwhelming, and it spurs me onward.

The doctors could not fix me; they could not explain my accelerated rate of healing, but I can. When I tell someone of this, they often respond with, “Wow, you are so lucky!” No, I am not lucky in the least, for if I was, “lucky,” the car would have missed me completely. I am blessed, blessed beyond good reason that the Great Physician, Who made my fragile body, was willing to repair it. Each day that I walk, I thank God. Even as I type the words on this paper, I thank God I can move my fingers. 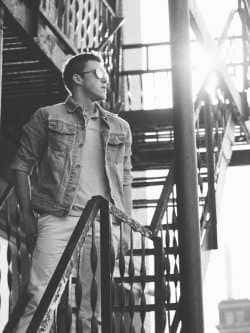 Before traveling home, my parents pushed me, sitting in my wheelchair, over to the hospital across the street to visit the “Hollywood Doctor.” The elevator stopped when it reached the floor on which he worked, the ding of its arrival snagged his attention and he observed us as we exited the elevator and approached him. We stopped several feet from the doctor standing in the hall holding a clip board. I set the breaks on my wheelchair, stood up, and walked over to him. His jaw dropped open, “I don’t believe it,” was all he uttered. The doctor turned his back, and as he walked away, I answered him. “That is why you have never witnessed this before. You must believe.”

Postscript: In time and with the patient and loving help of his family, David Aaron Beckner regained full mobility and went on to play basketball for his high school, graduated, and studied writing at West Virginia University in Morgantown, WV. He is now employed full time, and though he still has struggles that may last a lifetime, his faith and perseverance demonstrate that the improbable can become reality.