When dust containing tiny particles of silica is released into the air, usually in industrial settings like mining or drilling, workers in the area are in danger of breathing silica particles into their lungs resulting in silicosis.

Silica is a mineral commonly found in the earth’s crust, especially in quartz. When quartz or other rock containing silica is blasted apart, microscopic particles of silica are released as dust. Sand also often contains silica.

This exposure and inhalation of rock dust cause the lungs to inflame and scar, lessening the person’s ability to breathe, a disease called silicosis. Breathing in silica dust also raises the risk of other conditions like lung cancer, tuberculosis, chronic obstructive pulmonary disease, kidney disease, and disorders of the immune system.

Silicosis, classified with other lung dust diseases including asbestosis, is possibly the oldest known occupational diseases, resulting from changes in the lungs after the frequent inhalation of silica dust.

West Virginia Oil and Gas Drillers are at Risk For Silicosis

Not surprisingly,silicosisis a huge concern in West Virginia with its major mining industries. Historically, the state was home to the first major industrial exposure to silica in the 1930s at Hawk’s Nest, where the process of blasting a three-mile tunnel through a mountain containing silica-laced rock exposed thousands of Depression-era laborers to the dangerous dust.

Presently, the recent rise in hydraulic fracturing, a process known as fracking, may be exposing West Virginia oil and gas drillers to unsafe levels of silica and other forms of toxic exposure.

The National Institute for Occupational Safety and Health, known as NIOSH, has issued aHazard Alert for workers working in the fracking industry surrounding the issue of high concentrations of silica released in the fracking process. Fracking is a drilling method to extract oil and gas from deposits deep in the earth caught between layers of rock. High-pressure mixtures of liquid, sand, and chemicals are injected deep into this rock to fracture it and extract the oil and gas from the cracks.

The problem for workers is that the movement and manipulation of silica sand throughout the worksite causes the creation of hazardous dust. In fact, NIOSH asserts that there are seven phases of the fracking operation that create potentially dangerous silica exposures.

In conjunction with its Hazard Alert for fracking workers, NIOSH took air samples at fracking sites in five states and many readings were above the levels deemed by the government as acceptable for worker exposure. In light of the likelihood that fracking-operation employers may not be protecting workers from silica as legally required, workers need to be on alert.

If you or a loved one suspects exposure to silica dust from fracking in West Virginia or is suffering from silicosis or other related diseases from work-related dust, get medical attention and seek the advice of a work injury attorney to understand your legal rights to potential recovery. You should apply for workers’ compensation, but there may be other legal remedies against employers in certain circumstances and possibly against third parties like worksite property owners or faulty equipment manufacturers. 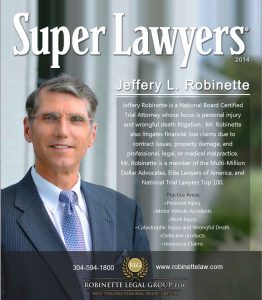 Jeff Robinette is an award-winning West Virginia Personal Injury and Wrongful Death Attorney with over 30 years of experience handling catastrophic injury cases. Mr. Robinette started his career working for insurance companies, and he now uses that experience to exclusively represent the injured and their families.