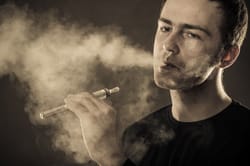 Morgantown, WV:  As smoking bans become the norm in public places throughout the communities of West Virginia, the number of people using e-cigarettes is rapidly increasing.

Smokers are turning to “smokeless” cigarettes because they believe these products are a safer and more acceptable alternative.

Supporters say these products have helped thousands of people quit and have helped millions cut back on their cigarette smoking. In all fairness, I have personally heard the testimony of former cigarette smokers who have been helped by this product and am truly glad to hear of their progress. Even so, these products are attractive, especially to the young, and the health problems which will present in the future are yet unknown.

A New York Senate hearing was held on May 15, 2014 which included many witnesses including public health officials and the American Cancer Society which called for a ban on e-cigarettes in public places.  It is unknown exactly what the effect of the chemicals emitted by the e-cigarette vapor has on the general public.

•· Right now, e-cigarettes aren’t specifically regulated by the FDA, which has created a “wild west” environment for manufacturers and distributors.

•· The quality of e-cigarettes and the e-liquids is largely inconsistent.

•· One teaspoon of the liquid nicotine used in these e-vaporizers (which sometimes contains flavorings like cherry, chocolate, and bubble gum) is enough to kill a child.  Of course children should not have access, but child poisonings are occurring.

•· Most of the nicotine from an e-cigarette is absorbed through the cheeks rather than in the lungs. Have you ever seen someone with oral cancer?

•· In 2013, 365 people were referred to hospitals for nicotine poisoning from these e-liquids.

•· Complaints of injury linked to e-cigarettes, from burns, nicotine toxicity, respiratory and cardiovascular problems have jumped to new levels.

•· E-cigarettes are now becoming a problem in our local schools because it is easy for a minor to get their hands on an e-cigarette because they are not currently regulated as a tobacco product.

•· The liquid stimulant used in e-cigarettes, when injected or absorbed through the skin, can cause vomiting, seizures, and death.

•· A number of e-cigarettes have exploded out of their chargers, causing facial injuries and fire.

If you have been injured by a defective consumer product in your home, workplace, or in your car, you are entitled to seek money damages for your medical care, lost earnings and pain and suffering.

Questions? Call the Robinette Legal Group, PLLC today: 1-304-594-1800 for a free consultation, or visit our website to find answers or begin an online chat 24/7.

If you have questions about injury claims, download our free, no obligation report for the answers you need today.

Miami Herald, “Crime Watch:  Reader is Horrified by Dangers of E-cigarettes,” by Carmen Gonzalez Caldwell, May 15, 2014.