Though the investigations are not complete, NIOSH has learned about several worker fatalities associated with flowback operations. According to their information, at least four workers have died since 2010 from what appears to be acute chemical exposures during flowback operations at well sites in the Williston Basin (North Dakota and Montana). 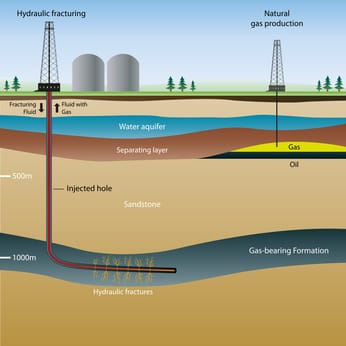 Before a well begins producing, each horizontal well needs between 2.4 and 7.8 million gallons of freshwater.  This water is pumped from local water sources like streams and rivers and then mixed with chemicals and sand.   It is then injected into the well bore under high pressure.

The force of this mixture is strong enough to fracture the shale to stimulate the flow of gas or oil.  As the gas or oil begins flowing, the mixture is pushed back up along with other substances picked up from deep underground like heavy metals, brine, naturally occurring radioactivity from uranium and volatile hydrocarbons.

Flowback refers to this process of the fluids from the wellbore which return to the surface and are collected after hydraulic fracturing is completed. After separation, flowback fluids are typically stored temporarily in tanks or surface impoundments (lined pits, ponds) at the well site. Liquid hydrocarbons from the separation process are routed to production tanks where they must be stored and then disposed of. Workers periodically gauge the fluid levels in flowback and production tanks with hand-held gauges (sticks and tapes) through access hatches located on the top of the tank.

Some problems which need to be addressed are the potential and occurrence of tears in linings, spills, and leaks in the waste storage tanks and ponds.  In addition to the onsite problems, local sewage treatment plants and landfills are often not equipped to test for and handle this amount of waste infused with salts, metals, and solvents.

Results from initial field studies suggest that certain flowback operations/activities can result in elevated concentrations of volatile hydrocarbons in the work environment that could be acute exposure hazards.  Volatile hydrocarbons have been found to affect the eyes, breathing, and the nervous system and at high concentrations may also affect the heart causing abnormal rhythms.

Toxic inhalation and chemical exposure injuries are serious. Workers Compensation may provide some remuneration for such injuries, but if it can be proved that your employer deliberately placed you in harm’s way, other legal actions can be taken to gain additional compensation to provide for your medical and future needs.

The Robinette Legal Group, PLLC has extensive experience handling  catastrophic injury and wrongful death claims throughout West Virginia. Call us toll free at 1-866-552-6091 or contact us online through the 24/7 chat line or email. We offer free initial consultations and take qualified cases on a contingency fee basis, meaning if you don’t get paid, we don’t get paid.

Wilber, Tom.  Under the Surface, Fracking, Fortunes, and the Fate of the Marcellus Shale.  New York:  Cornell University Press, 2012.