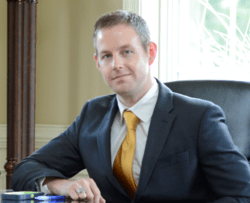 Morgantown Personal Injury Attorney Terry Tignor has been selected to the 2016 West Virginia Rising Stars list. Each year, no more than 2.5 percent of the lawyers in the state are selected by the research team at Super Lawyers to receive this honor.

Super Lawyers, a Thomson Reuters business, is a rating service of outstanding lawyers from more than 70 practice areas who have attained a high degree of peer recognition and professional achievement. The annual selections are made using a patented multiphase process that includes a statewide survey of lawyers, an independent research evaluation of candidates and peer reviews by practice area.

A native West Virginian, Terry Tignor attended West Virginia University for both undergraduate studies and law school where he prepared for his future career as a personal injury attorney by taking classes that emphasized civil law and trial advocacy. During his undergraduate studies, Terry was inducted into Pi Sigma Alpha, the nation’s only political science honor society.

In law school, Terry was a member of Phi Alpha Delta, the largest co-ed professional law fraternity in the United States, serving as Marshall of the WVU chapter for a semester. In addition, he also completed magistrate mediation training. Terry was admitted to practice law in 2011 and he is licensed in all levels of state and federal trial courts in West Virginia, as well as the Fourth Circuit Court of Appeals.

Terry is committed to advancing his skills and experience in order to better serve the clients of Robinette Legal Group, PLLC, including his completion of the National Trial Advocacy College at the University of Virginia.

Terry Tignor is committed to serving his community outside of the office as well. Terry and his wife Rachel enjoy preparing meals and playing music for guests of the Ronald McDonald House in Morgantown, WV and serving their church in various capacities.