Posted On March 31, 2017 I Firm News,Legislation and New Laws,Motorcycle Accidents

Escape… Freedom… the wind blowing through your hair… not a care in the world… until you hit the loose gravel on the highway or one of our cursed West Virginia potholes. 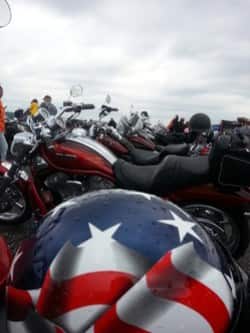 This week the state of West Virginia came close to passing a bill which would have repealed our current motorcycle helmet law. The bill failed in a 15-19 vote and was followed by a lengthy debate about safety vs. individual right to choose. The main problem is, no one chooses when to have a motorcycle wreck.

Our favorite long distance charity biker, Hoagy Carmichael of Hoagy’s Heroes, rode for decades without a helmet and loved the feeling of freedom and rush of speed, but the loss of a dear friend who was riding 25 mph and lost her life due to a head injury changed his mind. Now he proud to be unfailingly ATGATT, which is a biker’s acronym for All the Gear, All the time.

The failed bill would have allowed motorcyclists age 21 and older to choose whether or not to wear a helmet if they had a license for at least five years and carried at least the minimum required insurance including $15,000 in medical payments insurance coverage and health insurance.

Supporters of the bill argued that it should up to the individual, that this was about adults making the decision to ride without a helmet. Opponents argued that the use of public highways is a privilege, not a right, so safety rules apply in the same way that we have speed limits so that we do not put others at risk for a chosen conduct.

Others argued that even though there would be insurance requirements, the public would end up paying for the expenses associated with the injuries and deaths, whether in the form of health care, or in the form of public assistance for those family members left behind after a wage earner’s untimely death. After the fact is too late to evaluate whether or not a person was adequately insured. It is a lot easier to spot the absence of a helmet than it is to detect inadequate or non-existent insurance coverage.

I agree with Senator Mike Woelfel of Cabell County who said the bill which would have repealed the existing helmet law should have been named the Organ Donor Act of 2017. According to Senator Woelfel, “Repealing the existing law requiring helmets would lead to an increase in medical bills and long-term care expenses for people with head injuries, and those expenses would end up being paid with taxpayer money.”

The NHTSA estimates that nearly two thousand lives are saved a year by helmet use, and a recent University of Michigan study found that the fatality rate of riders not wearing helmets was double those wearing head protection.

So, as of March 29, 2017, you still have to wear a helmet while biking through our scenic state.