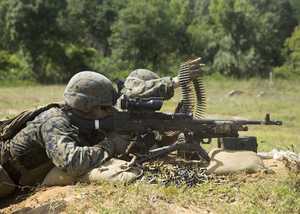 “As an Army veteran who served as an 82nd Airborne field artillery officer, I find it appalling and negligent that a nationally recognized company would knowingly and willingly sell defective earplugs to the US military.

Ironically, the Marines, Soldiers, Airmen, and Veterans who have been permanently damaged by these defective earplugs are the same citizens who signed on willingly to lay down their lives so companies such as 3M can have the freedom to do business and make enormous profits in our great country’s free enterprise system.”~Jeff Robinette

In 2018, 3M agreed to pay $9.1 million to the United States Government. The 3M company was facing claims that it fraudulently billed the federal government for defective earplugs that it provided for use in military training exercises and combat. The court stated that half of the suit was restitution and the other half was punitive damages (punishment).

The 9.1 MILLION was paid to the federal government as opposed to the servicemembers who were damaged by the earplugs that failed to work!

3M Admitted They Knew the Earplugs Were Defective

The lawsuit alleged that3M knew of this defectin the earplugs and went out of its way to conceal it. According to the lawsuit, 3M’s own tests revealed that these earplugs were defective, yetthe company falsified the required certificationsthat stated that the product complied with military standards.

3M’s contract with the federal government called for it to provide approximately750,000 pairs of these earplugs annually, and the company supplied these earplugs from the time it was awarded the contract in 2006 through the time that it discontinued the product in 2015.

The lawsuit further alleged that 3M knew that these products were defective six years before it even sold a pair of earplugs to the military.

Who Can File a Military Earplug Lawsuit Against 3M?

In addition to the whistle-blower lawsuit against 3M recently settled in court, hundreds of lawsuits have already been filed in federal court districts byindividualsregarding permanent damage from the defective earplugs.

Any veteran who used these earplugs and has suffered some sort of hearing damage is eligible to file aCombat Arms Earplug Lawsuitin court provided that the lawsuit is brought within the applicable statute of limitations.

Servicemembers who have been impacted by the purportedly defective product must both file for veterans benefits as well as wage their own legal battle against the manufacturer of these earplugs.

In order to prevail at trial, a plaintiff would have to show that the earplugs were defective and that the hearing damage was caused, at least in part by the defective earplugs.

At this point, the lawsuits are filed individually, but there is a high likelihood that the hundreds of lawsuits will be consolidated into a class action suit or be handled as multidistrict litigation for the purposes of discovery and pre-trial matters.

It is unclear at this point how much compensation veterans may receive from the lawsuit if it is proven that these earplugs were defective.

How Defective Earplugs Can Cause Tinnitus

Defective earplugs can cause tinnitus by failing to protect the servicemember from loud sounds to which they may be exposed in a training or combat situation.

While tinnitus is usually caused by prolonged exposure to these sounds, one loud noise can also cause the condition and permanent damage.

When soldiers are deployed, the loud noise would generally come from some sort of explosion such as artillery fire. Earplugs need to be completely in the proper position to provide the maximum possible protection for a soldier.

Earplugs that have shifted are ineffective and fail to provide the proper amount of protection. When earplugs are not long enough on either end, they stand a larger chance of shifting out of place.

While 3M is contesting liability at this point, 3M may seek to enter into a global settlement of these claims and establish a settlement fund at some point.

Many of these suits are seeking punitive damages beyond the usual claims for lost wages, pain, suffering,and medical expenses.

If a jury finds 3M liable and decides to assess punitive damages against 3M, the amount of recovery may skyrocket.

If you are interested in filing a military earplug lawsuit, contact the Robinette Legal Group PLLC at 304.594.1800.