Are Morgantown Hospitals Prepared for Admission of Ebola Patients?

A WVU Healthcare Ebola Task Force is now prepared for any potential encounters with the Ebola virus. Personnel from emergency medicine, infectious diseases, nursing, and several other areas of the hospital have undergone training and the hospital spent half a million dollars converting a section of its emergency department into a special unit designed to protect both patients and healthcare workers.

Ruby Memorial Hospital in Morgantown is now equipped and prepared with an Infection Prevention and Containment Unit, complete with five isolations rooms, in the event that any sick person be admitted who has had any possible exposure to the Ebola virus.

Original post: Last week, Ruby Memorial Hospital was put through its paces to handle such a contingency when two patients came to Ruby Memorial Hospital Monday night with flu-like symptoms. Because international travel was involved, the hospital reportedly exercised the proper measures as outlined by the Center for Disease Control and Prevention (CDC) for a possible Ebola infection. The doctors were in communication with the state health department and CDC. Thankfully, the patients tested negative for Ebola.

Ebola is a severe, often deadly virus that is transmitted in humans through bodily fluids. In West Africa, more than 8,900 people have been diagnosed with Ebola and 4,500 have died. 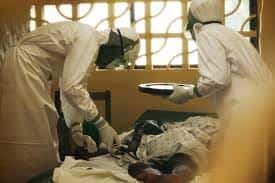 This crisis is so concerning that the US Nurses Union called for President Obama to invoke executive authority to mandate rules that hospitals should follow to protect against the virus’s spread. The Union representatives stated emphatically that United States healthcare systems don’t have the training or resources to manage an outbreak of the disease.

The Nurse’s Union asked the President to mandate that every health care employer institute a series of protocols when treating Ebola patients, including the use of full-body hazmat suits that leave no skin exposed or unprotected; two direct care registered nurses for each Ebola patient and continuous, updated training on Ebola for nurses exposed to Ebola patients.

During an October 17th interview, West Virginia Representative Nick Rahall blasted the CDC for not acting quickly or strongly enough to prevent infection of U.S. healthcare workers. “The CDC has not given us the greatest deal of confidence or increased our trust in government agencies, far from it,” Rahall said on Friday’s MetroNews “Talkline.”

In a statement posted on October 20, 2014, WVU Healthcare assured the Morgantown community and West Virginians that they will be following the new Center for Disease Control and Prevention guidelines which call for full body/skin protection for health care workers directly caring for any patient diagnosed with or suspected of having the Ebola virus. A plan is in place for appropriate isolation and treatment should any patient have the need. The county health department and Department of Human Services have been working closely with WVU Healthcare to do everything possible to ensure good health and protect the residents of Monongalia County.

The new CDC guidelines are expected to set a firmer standard: Calling for full-body suits and hoods that protect worker’s necks, setting rigorous rules for removal of equipment and disinfection of hands, and calling for a “site manager” to supervise the putting on and taking off of equipment.

The guidelines also are expected to require a “buddy system,” in which workers check each other as they come in and go out.

“The physicians, nurses, and other health professionals at WVU Healthcare are experienced and trained in emergency preparedness. A WVU Healthcare Ebola Task Force includes key people in emergency medicine, infectious diseases, nursing, and many other areas throughout the hospital who have been preparing for a possible Ebola outbreak here. Teams are working together to educate and prepare our staff at all levels on the latest protocols.”~ WVU Healthcare Systems

Travel Bans as a Strategy to Stop the Spread of Ebola

To prevent the United States from becoming a hotbed of the spread of Ebola, many have called for a ban on international flights from affected countries. A prominent Los Angeles personal injury andcruise line attorney, Michael Ehline, has done extensive research into the Ebola crisis taking into account the political, social, and public health issues surrounding this highly infectious disease with regard to the travel industry.

“In any event, we see this disease spreading like wildfire, and 27 countries have temporarily suspended travel from West Africa. But in the U.S., it is business as usual, except that now our overloaded hospitals are faced with statistically greater chances of being exposed to and spreading Ebola. The mainstream press is doing its best to cover for the administration, as are its agency talking heads. At the end of the day, one Ebola case is more than enough for a single American to suffer.

“The disease must be contained and stopped at its source. Perhaps nurses and hospitals are to blame for failure to contain it once it is here, but it is pure recklessness to fail to institute a temporary travel ban at the very least, and set up Ebola treatment centers that are located outside of ordinary hospitals, like they have in West Africa.”

Few in our community are as caring as the health care workers in Monongalia County. Thankfully, we have resources available here in abundance that are non-existent or at best, scarce, in war-torn West African nations where sufferers are often treated outdoors in make-shift facilities.

In Liberia and Sierra Leone, the night clubs have shut their doors. Soccer leagues have been suspended. A strict curfew is keeping the streets empty at night, but the churches are full. In countries where the government is often not trusted, the religious leaders have the confidence of the people and are offering hope, comfort, and essential health safety information to prevent the spread of Ebola.

In response to the spread of the Ebola infection in West Africa, the paradox between safety and care has caused a conundrum for the friends, family members, and health care workers faced with this most frightening disease.

This is the hard truth of providing care in these countries, where families are strong but without adequate material, monetary, and health care systems available:

In addition to the family members and loved ones who may have direct contact with a person infected with the Ebola virus, others who may be directly affected include lab technicians (such as the passenger on the Carnival Cruise who voluntarily isolated himself after learning that he may have been at risk), doctors, physician’s assistants, EMTs, nurses, therapists, volunteers, dentists, autopsy personnel and even dietary and laundry workers. In West Africa, those who care may end up dying, but in West Virginia it need not be so.

Having firm strategies in place in health care settings and banning incoming flights from West Africa would be a beginning, but only a beginning.

In a university setting such as Morgantown, it is easy to image a Doctors Without Borders volunteer or a WVU student departing from Sierra Leone, feeling fine, on a flight to Cairo, Egypt in East Africa. While traveling, he begins suffering a headache-nothing terrible yet, just discomfort, but it’s the first hint of Ebola. At the Cairo airport, the traveler coughs onto a table in the restaurant. Five minutes later, an American tourist touches that table and rubs her eye. She departs to Hong Kong and spends a few days there, in good health, enjoying the sights. Then she flies home to Los Angeles. To the screeners at LAX, she is an American tourist arriving from Hong Kong, with no history of recent travel in West Africa. But she’s now infected with Ebola, carrying it into the United States to her family.

We have little control over the rest of the world, but it is a comfort to know that our local Morgantown healthcare systems have a plan and are training hospital personnel. With the stepped-up CDC guidelines combined with the best hospitals in West Virginia, the goal of 100% non-transmission is achievable. Now it’s up to each healthcare provider to follow these guidelines to the letter.

WV MetroNews,State official on Ebola: “Our job is to protect the public’s health.” Shauna Johnson, October 16, 2014.