Families are fervently praying and calling their neighbors to pray after a drunk driver ran over their 12-year-old son’s legs and hit two other children and two adults who were walking near the admission gate of the Mason County Fair.  The boy, Brailey Wallace, and his two brothers were among the five people hit. 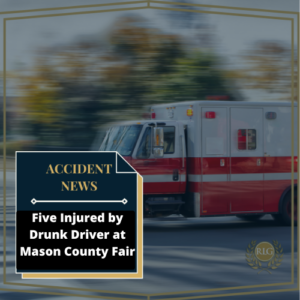 The boy had to be flown from Cabell-Huntington Hospital to Ruby Hospital in Morgantown, a Level One Trauma Center.  Patients with the most serious injuries are designated a level 1 trauma, indicating a need for a larger trauma team and faster response time such as the WVU Hospital System provides.  Brailey underwent a six-hour surgery and will have a lengthy recovery filled with medical appointments and physical therapy as a result of the drunk driver’s negligence.

The incident happened around 6 p.m. Friday, August 12, 2022, on Fair Ground Road just a few hundred feet from the fair entrance just as the children were entering to enjoy what they expected to be a really fun evening.  The driver was arrested for running over and hitting pedestrians with his vehicle and also for damaging several parked cars.

Drunk Drivers Cause Injuries and Death in West Virginia

Drunk drivers cause millions of dollars in damage on our West Virginia roads and highways every year. But as bad as the dollar losses in property damage are, they cannot compare to the incalculable physical injuries and loss of life. There is no amount of money that can compensate for the injustice of losing a loved one or suffering a life-changing injury because of a serious act of negligence like DUI.

According to NHTSA, every day, about 32 people in the United States die in drunk-driving crashes — that’s one person every 45 minutes. In 2020, 11,654 people died in alcohol-impaired driving traffic deaths — a 14% increase from 2019. These deaths were all preventable.

Thank God that these victims of the DUI driver are still alive and are receiving some of the best medical care in the state of West Virginia.

This horrible event illustrates why we have never, ever as a law firm represented a DUI offender to allow them to get back to endangering the people on our roads.

If you were impacted by an accident involving a drunk driver, you should immediately contact a West Virginia DUI car accident attorney at the Robinette Legal Group PLLC in Morgantown for help with your insurance claim. Free case review: 304-594-1800.