If You Drink & Drive, Luck is Not on Your Side | St. Patrick’s Day Safety

St. Patrick’s Day brings to mind shamrocks, leprechauns, pots of gold, and good luck, but luck can’t save you from a drunk-driving crash. Unfortunately, March 17 has become a deadly day in the United States, with a dramatic spike in drunk-driving fatalities, a day when 30-40% of vehicle accidents are caused by DUI. 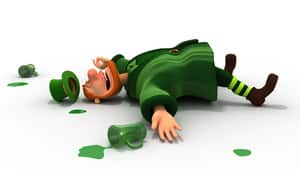 Every one of those lives was lost because of bad decisions. NHTSA wants to remind everyone thatBuzzed Driving Is Drunk Driving.

Martha Mitchell Meade,Manager of Public and Government Affairs for AAA Mid-Atlantic, offered this advice to partygoers: “Get ahead of the decision this year. If you know you’re going to celebrate St. Patrick’s Day with alcohol, then figure out a plan ahead of time for how you will get home. Do not wait until you’re too buzzed to decide, and don’t let your friends drive drunk.”

Hosting your own St. Patrick’s Day party? Here are some safe party tips:

Buzzed Driving Is Drunk Driving,so if you have anything to drink, count on a sober friend, taxi, or public transportation to drive you home safely. Not drinking? Maybe this St. Patrick’s Day, you’ll be the saint who drives your friends sober.

The bottom line is this: Too many Americans fail to designate sober drivers. NHTSA is working hard to make sure every driver knows the dangers of getting behind the wheel after drinking. According to NHTSA, in 2013 on average one person was killed every 52 minutes in a drunk-driving crash in the United States. That totaled 10,076 drunk-driving fatalities that year.

Your Lucky Charm May Be a Designated Driver

Use this checklist to stay safe this St. Patrick’s Day.

1. Even if you’ve only had a couple of drinks, you may be impaired and shouldn’t drive.Remember,buzzed driving is drunk driving.

2. Of course, it is illegal to drive impaired in every state, but keep in mind that allowable limits of BAC vary from state to state.

3. If you’re impaired, use Morgantown Taxi or a ride App service like Uber, call a sober friend or family member, or use the Mountain Lion Bus Service.

4. If you know someone who is about to drive drunk or ride with someone who is impaired, help them make other arrangements to get to where they are going safely. If a friend is drunk and wants to drive, take the keys away. Don’t worry about offending someone – they’ll thank you later.

5. If you think that cab fare is too expensive or you are worried about your car being towed or ticketed if you leave it somewhere overnight, consider that the average driving under the influence citation costs about $10,000.

6. Even if you don’t have plans yet, plan to drive sober or designate someone else to. Save the number of a taxi company in your phone so you always have a backup plan.

7. Before you take your first sip of green beer, leave your keys at home or give them to a friend. If you’re the designated driver, don’t drink. Only drive sober or ride with a sober driver.

Drunk driving has fatal consequences. If you see a drunk driver on the road, contact local police immediately. You could save a life.

In fact, in past years, three out of four drunken driving fatalities occurred with drivers who had blood-alcohol levels atmore than doublethe legal limit. In 2015, there were over 10,200 fatal crashes in the U.S. which involved alcohol use.

Please plan ahead to get home safe. If you wait until you’ve been drinking alcohol on St. Patrick’s Day to decide how you’ll get home, it may be too late.

MADD: When You Drink & Drive, Luck is Not on Your Side

A Sober Driver is Your Lucky Charm on St. Patrick’s Day

St. Patrick’s Day is One of the Deadliest Days of the Year Because of Drunk Driving