Morgantown, WV Auto Collision on the Mileground Results in Injuries

Testimonial and Review From a Morgantown WV Car Accident Client

We were driving down the Mileground, my wife and I, and somebody pulled out of a bar and didn’t stop. They didn’t slow down or anything and just accelerated into us and just kind of T-boned us in the middle, but just enough in the back so the impact kicked the car around and it rolled down the Mileground.

As it turned out, the driver didn’t have a driver’s license, had no insurance, and the police just kind of let him go. And we got seriously injured, like genuinely really hurt. And in fact, it is still ongoing to this day where we have consequences from that accident.

Now, the insurance company put me in contact with one person, and then the run-around began. I went from one person to another and they didn’t return calls, they didn’t return letters, they — nobody knew what I was talking about — and I was passed on to the next person.

And I figured that by having contacted my own insurance company, that was good enough to initiate the process, that I was good. Then, luckily I talked to Jeff Robinette.

This went on for a good year and a half. I got ahold of you and I said, “These insurance guys are just putting me off,” but I figured that everything was okay, it was just a matter of time and wondered if Jeff would take over for me.

Mr. Robinette let me know that there was a two-year statute of limitations, and had I not, or had Robinette Legal Group, not filed something officially in the court, my insurance company would have just drug it out for a few more months, and that would have been it.

Questions? We have Answers.

Here’s the gracious review that Jerry Hogue left for the Robinette Legal Group PLLC on Google: 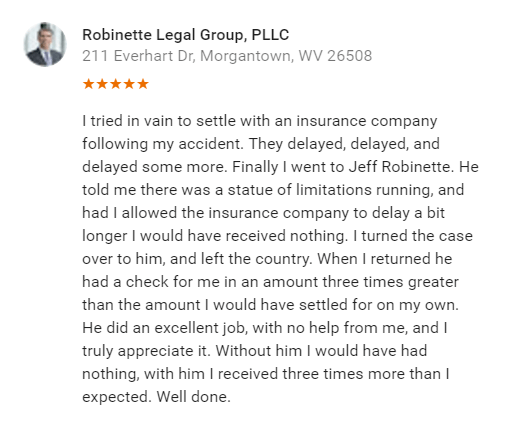 It is always a pleasure to help deserving, seriously injured clients obtain their best result!