Multi-vehicle Accidents on I-68 Claim Three Lives, Injure Others

When the days are short andthe temperature drops below freezing, driving hazards are increased exponentially. Snow, ice, and foggy conditions make driving treacherous, often causingvehicle wrecks and injuries. When winter driving is made even more dangerous by debris on the road, the results can be fatal.

Three Fatal Wrecks on I-68

Recently,a young New Jersey man was killed and several others injured in a chain-reaction accident on Friday, December 19,2014 on interstate 68 in Preston County near the Monongalia County line close to the Coopers Rock exit. While it was originally reported that six other vehicles were involved, later reports indicated that seven vehicles were involved in the collisions.

The crash occurred around 9:30 p.m. and closed both east and westbound lanes of the interstate for several hours, creating a several mile-long traffic backup. 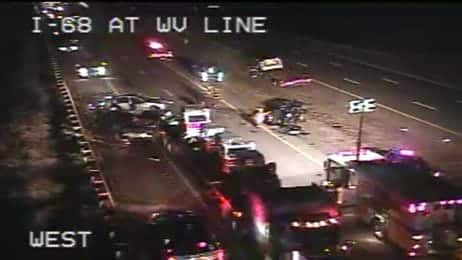 The next day, on Saturday December 20th, another bad wreckshut down I-68 again at mile marker 29.On I-68 Eastbound, both laneswere closedfrom Hazelton Exit to Friendsville Exit in Garrett County, MD, and the closurewas expected to last for 3-4 hours.

Two people died, oneaMorgantown man, following the chain of wrecks on Interstate 68 in Garrett County near the West Virginia state line. The initial wreck was the cause of the death of the first accident victim, and the police reported that while traffic was stopped in the eastbound lanes to allow a helicopter to land at the scene, there was a chain reaction accident that claimedthe life of a young Maryland woman.

Our hearts and prayers go out for the crash victims, families, and friends who have been directly affected by these tragic accidents. Grief and recovery were not in their plans; the holiday season will never be the same for these families.

Drivers need to take into account that a different climate and weather exists up on these elevated mountain passes and take precautions accordingly. The unexpected is more likely to occur, so heightened vigilance and attention to the road is required during these winter months.

Authorities in the Preston County sheriff’s office said the initial wreck was caused by debris in the roadway. A witness to the accident reported that a truck topper was on the interstate and may have been the initial cause of the collision. Investigations into all the causes of the wrecks are ongoing.

In a multi-car pileup, fault may be harder to prove because of the multiple vehicles involved. Anyone involved in such a collision should contacttheir insurance company right away and provide information about the effects of the accident onthe vehicle and health, and any information gathered from other drivers at the accident scene.

Ifa person hasany reason to believehe was injured and hasn’t seen a doctor, he should go immediately. Sometimes the adrenaline produced immediately after the accident can mask symptoms which can later cause a great deal of pain, and early treatment can eliminate a lot of future medical problems and pain.

Often, early intervention withphysical therapycan eliminate a need for surgery later – so one should get a medical opinion right away andfollow all doctor’s orders, document everything, and keep records and receipts from all medical office visits, as well as receipts from all expenses related to the crash.

When a personhasbeen severely injured, it is importantwhen filingan injury insuranceclaim to keep personal notes about how these injuries are affectingyour daily lifeand your family.

Who Can you Trust with your Car Accident Case?