Posted On March 16, 2015 I Firm News,Property and Fire Damage,Train Accidents

Four major oil tanker train derailments have occurred in the US this year as of mid-March including the February derailment in Fayette County, WV. Even with the dangers and possibility of explosion of alternative pipelines for oil and gas, it seems the pipeline option would prove to be safer than routing trains transporting 100+ tankers full of oil through cities, towns and neighborhoods. Manyfire property damage insurance claimsand subsequent lawsuits will be filed as a result of these fires and explosions which have occurred in residential and business areas. 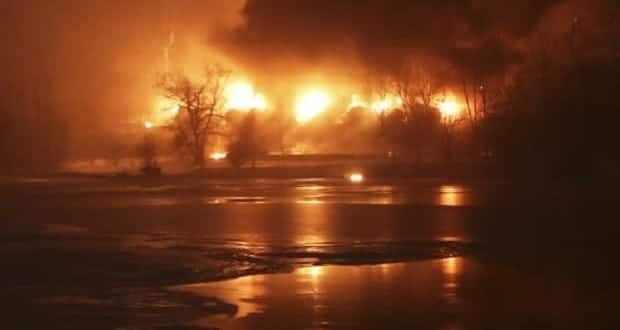 A CSX Corp train hauling North Dakota crude derailed in West Virginia near Mount Carbon in Fayette County on Monday, February 16, 2015, setting a number of cars ablaze, destroying a house and forcing the evacuation of two towns in the second significant oil-train incident in three days.

The owners of this home will havelegal right to compensationfor all their damages. They will have the right to file a lawsuit against their homeowner’s insurance and also the company who caused the damage for additional compensation.

CSX announced it was continuing an assessment to determine the number of cars derailed and the oil spilled. It said crews were working to contain oil found in Armstrong Creek that runs parallel to the company’s tracks. The company also said fires around some of the wrecked cars would be allowed to burn out.

At least one house was destroyed, but police have found no evidence of fatalities. CSX said one person was treated for potential inhalation (of fumes).

A state police sergeant said that nine or 10 of the cars had exploded at intervals of about every half hour.

A similar sequence has occurred in a handful of other derailments over the past year and a half, with the fire from one tank heating up gases in the next nearest car, causing it to ignite.”It’s a real mess down here,” Duckworth said.

Crist said freezing temperatures and constant snowfall is making clean-up difficult. A mile-wide area around the incident affecting more than 200 people who were evacuated after a house caught fire.

In March, 21 cars of a 105-car Burlington Northern-Santa Fe train hauling oil from the Bakken region of North Dakota derailed about 3 miles outside Galena, Illinois, a town of about 3,000 in the state’s northwest corner. A few days later, a 94-car Canadian National Railway crude oil train derailed about 3 miles outside the Northern Ontario town of Gogama and destroyed a bridge. The accident was only 23 miles from the Feb. 14th derailment.

The worst such accident in recent years involved a runaway train derailed in Lac-Megantic, Quebec, just across the U.S.-Canada border from Maine, on July 6, 2013. The resulting explosions and fire killed 47 people and destroyed the town’s business district.

Why are there so many of these accidents?

The number of accidents is going up because the oil boom in the U.S. and Canada has dramatically increased the amount of oil shipped by rail. Last year, railroads moved 493,126 tank cars of crude oil, compared to 407,761 in 2013. That’s up from just 9,500 cars in 2008 before the hydraulic fracturing boom took off in the Bakken region of North Dakota, Montana and Canada, as well as other areas.

Many factors can cause an accident, from too great a speed to operator fatigue. We won’t know the cause of the most recent ones until investigations are complete, but weather may be a factor.

“You get real cold weather like this and a rail can just snap … a wheel will shatter like a piece of glass,” said Ed Dobranetski, a former National Transportation Safety Board rail accidents investigator.

The Transportation Safety Board of Canada said investigators have recovered a section of broken rail containing a rail joint and a broken wheel “that are of interest” in the Feb. 14 derailment.

Since 2008, the Mississippi River corridor has emerged as a major pathway for shipping crude oil to refineries from the Bakken fields in North Dakota and Montana.

The trains routinely carry 100 tankers at a time – or roughly 3 million gallons of crude oil, according to industry figures. Bakken crude is also highly volatile and, thus, more prone to fires.

Rail shipments of oil aren’t expected to decline any time soon. One reason: The alternative is shipping oil by pipeline, and new pipelines are costly and controversial.

A plan by Enbridge Energy Co. to increase pumping capacity of its pipeline from Superior to the Illinois border has come under fire from environmentalists. The company has also faced criticism for spills and paid fines of $1.1 million in Wisconsin for violating state environmental laws when it built the line in 2007 and 2008.

In February, President Barack Obama vetoed a bill that would have allowed the Keystone XL pipeline to proceed. The pipeline to move oil from Canada to the United States has been under review by the federal government since 2008.