Shortly after 11:00 p.m. on Friday, April 17, 2015, a driver entered I-68 through the exit ramp at exit 4 at Sabraton and proceeded to travel the wrong way on I-68. He traveled a mile, and then his SUV hit another vehicle in the eastbound lane, causing a horrible accident, a head-on collision, resulting in a fiery explosion. Two people killed, including the driver of the SUV, and one injured is the current report. 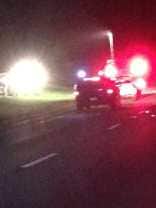 Several vehicles were involved, at least three directly: a Volkswagon, Subaru, and the SUV. Reports at the scene said traffic was backed up all the way to Washington PA on I-79, and was backed up at a stand still near the Sabraton exit of interstate 68 for four hours between mile markers 1 and 4. By 1:30 a.m., one westbound lane had opened outside of Morgantown, WV.

One unsung hero in this tragic collision was a tractor trailer driver who pulled over, took out his fire extinguisher, extinguished a fire, and attempted to pull one of the accident victims from a vehicle. Now that’s bravery.

According to Coach Tom Bloom, the University High School (UHS) tennis team bus was about 15 seconds behind that collision when it happened. Thankfully, the team bus was not involved in the crash and no one was hurt, but the team spent four hours confined to the bus after traveling two hours back from their match and arrived back at the school at 4:00 a.m. Our daughter was on that bus, so we are extremely thankful that it was not directly in the line of this wrong-way driver on I-68. So very sad for those who were. So tragic and preventable. God help those families who lost loved ones last night.