Roadway and highway constructionwork zones are hazardous both for motorists who drive through the complex array of lane changes, signs, and barrels and alsofor workers who build, repair, and maintain our streets, bridges, and highways.

Roadconstruction workersplace their lives in the hands of other workers on site, as well as equipment manufacturers and the drivers of vehicles traveling through their designated work zones on our West Virginia interstate highways.

The highway construction season also coincides with the most enjoyable months of motorcycle season, causing additionalhazards to bikersas well as the workers on the highways. 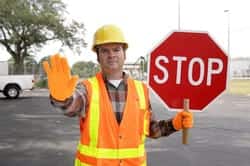 A trooper dressed as a construction worker uses a laser unit to clock the speed of motorists and then he radios ahead to troopers who pull over the drivers. This is not considered a speed trap because the zone is clearly marked.Thegoal is safety, not increasing revenue from ticketing.

Officers have observed that the longer a work zone has existed, the more likely motorists are to speed through and ignore warnings. So, never let down your guard in these familiar areas, for your safety and the safety of the work crews.

Nearly half of worker fatalities are caused when workers are run over or backed over by vehicles or mobile equipment. More than half of these fatalities were workers struck by construction vehicles rather than vehicles passing through the work zone.

Other injuries and fatalities to road crew workers were caused by:

If you have been injured in a work zone, the attorneys atRobinette Legal Group, PLLChave the professional resources to handle the most complex construction accident claims, includingwrongful death and catastrophic injuriessuch asbrain injuries, back andspine injuries, anddisfigurement.

From our offices in Morgantown, we represent injured construction workers throughout West Virginia.Contactus today. If you do not yet have a workers’ comp lawyer, we will refer you to one.