On August 17, 2018, one person was killed and two people were left in critical condition in a crash along Interstate 77 in Mercer County, West Virginia. That afternoon, the driver of a double tractor-trailer lost control of his wheel and collided with two vehicles along the same stretch.

After an analysis of a decade of fatal crash data, we found that this stretch of I-77  is the deadliest mile of road in West Virginia.  In fact, from 2000 through 2019, 11 people were killed on this single mile.

At Robinette Legal Group, we understand that West Virginia’s mountainous terrain and inclement weather patterns not only pose very specific risks for drivers, but it also makes it difficult for the city to fund and fix these roads.  However, we believe it is important to identify areas that may put drivers at risk of a deadly collision.

We began by identifying the single deadliest mile of road, then moved on to finding the deadliest 5-mile stretches in the state of West Virginia.

The Deadliest Mile in West Virginia

As previously mentioned, the deadliest mile in West Virginia is a curvy stretch of I-77 in rural Mercer County near Camp Creek.  During our study period, we observed an average of one fatal crash per 2.8 miles for all primary and secondary roads in West Virginia.  This single mile saw 10 fatal crashes – 28 times more than the average mile. 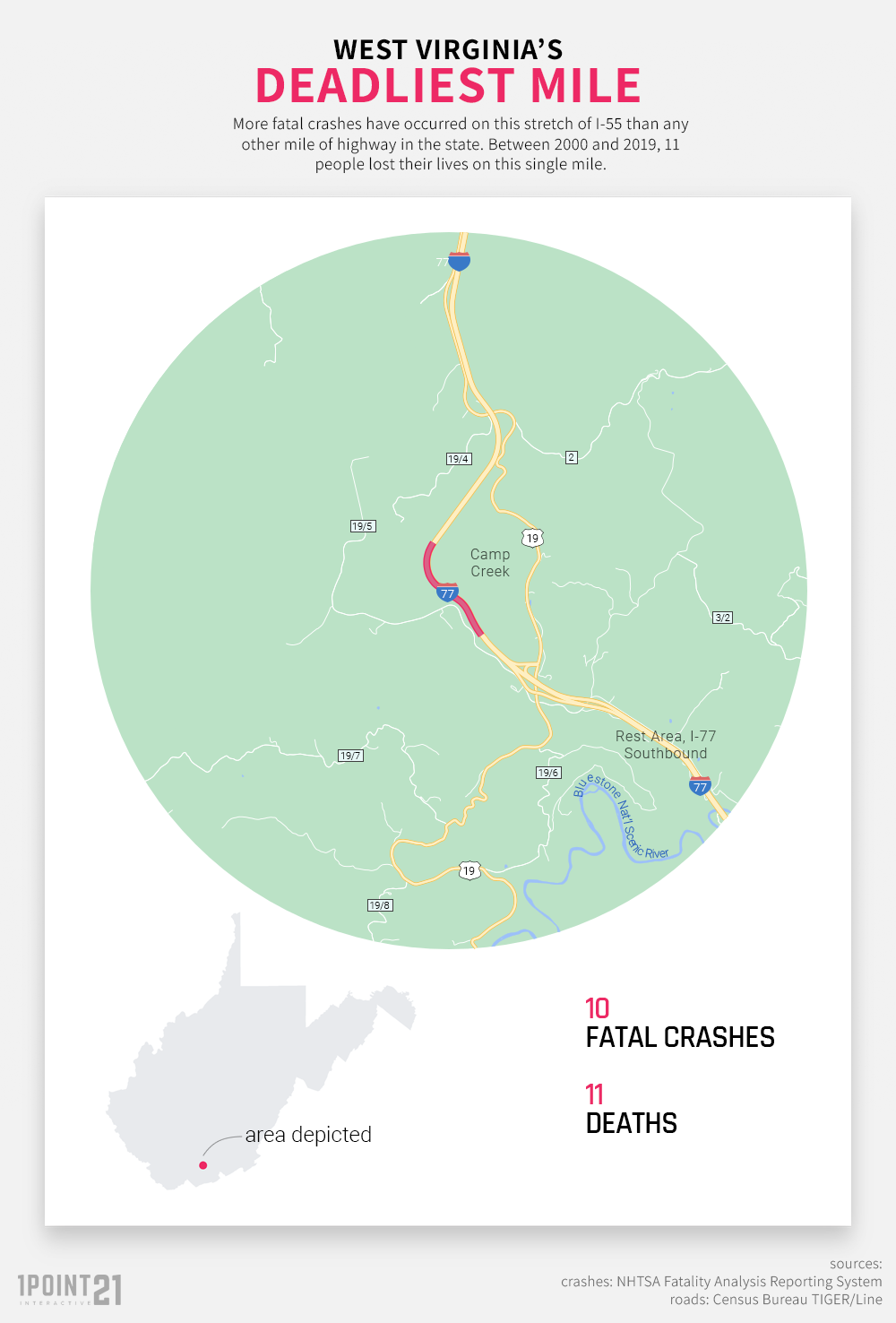 Bordered by cliffs on one side and a dropoff on the other, this steeply graded section of highway is well-known to state officials as particularly dangerous.  As a result, local governments made efforts to improve safety here, increasing speed patrols, adding flashing signs to both lanes, and reducing the speed limit from 70 to 60 miles per hour for a two-year period.  These efforts are a testament to the importance of studies and efforts like this one.

During our study period, we identified 12 five-mile stretches where at least 17 fatal collisions occurred. 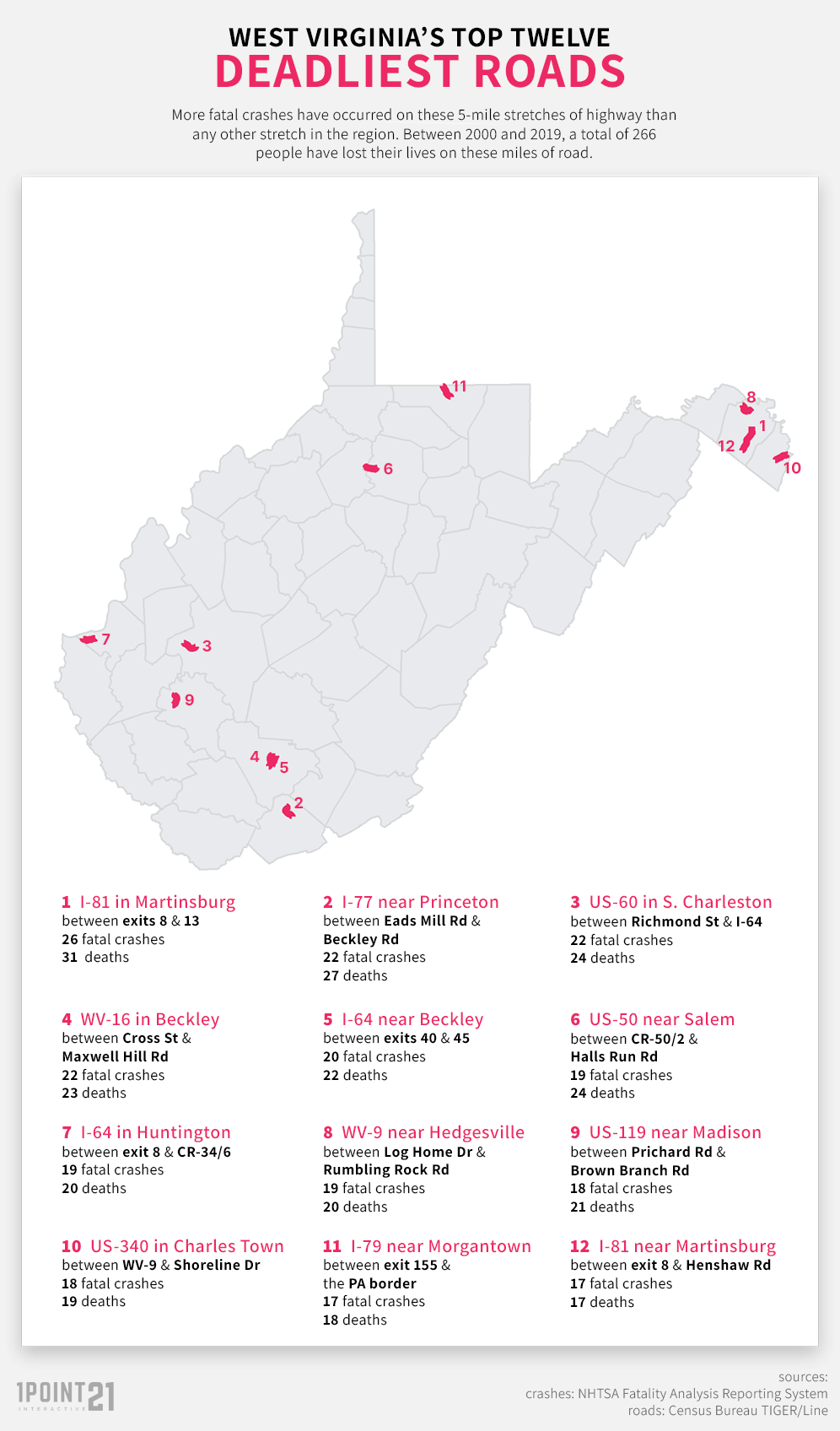 From 2000-2019, Martinsburg’s Interstate 81, between exits 8 and 13, is the deadliest five-mile stretch in West Virginia. A total of 31 people lost their lives here in 26 fatal crashes – more than on any other stretch of road in West Virginia.

Motorists often drive far too fast or conditions on this highway, resulting in serious collisions and prompting an anti-speed initiative by the county. In August 2021, Berkeley County’s sheriff installed warning message boards with sensors to detect when a driver is in violation of speeding. In addition, he is working with the West Virginia legislature to add cameras that can record the license plate numbers and send citations to motorists who violate safety laws.

A closer look at the top 12

The Deadliest Stretch in Each Region

The top twelve are concentrated in a few regions of the state, notably the easter panhandle and the Southeastern region.  However, we wanted our analysis to help motorists in all areas of West Virginia.  To achieve this, we also identified the deadliest stretch in each region. 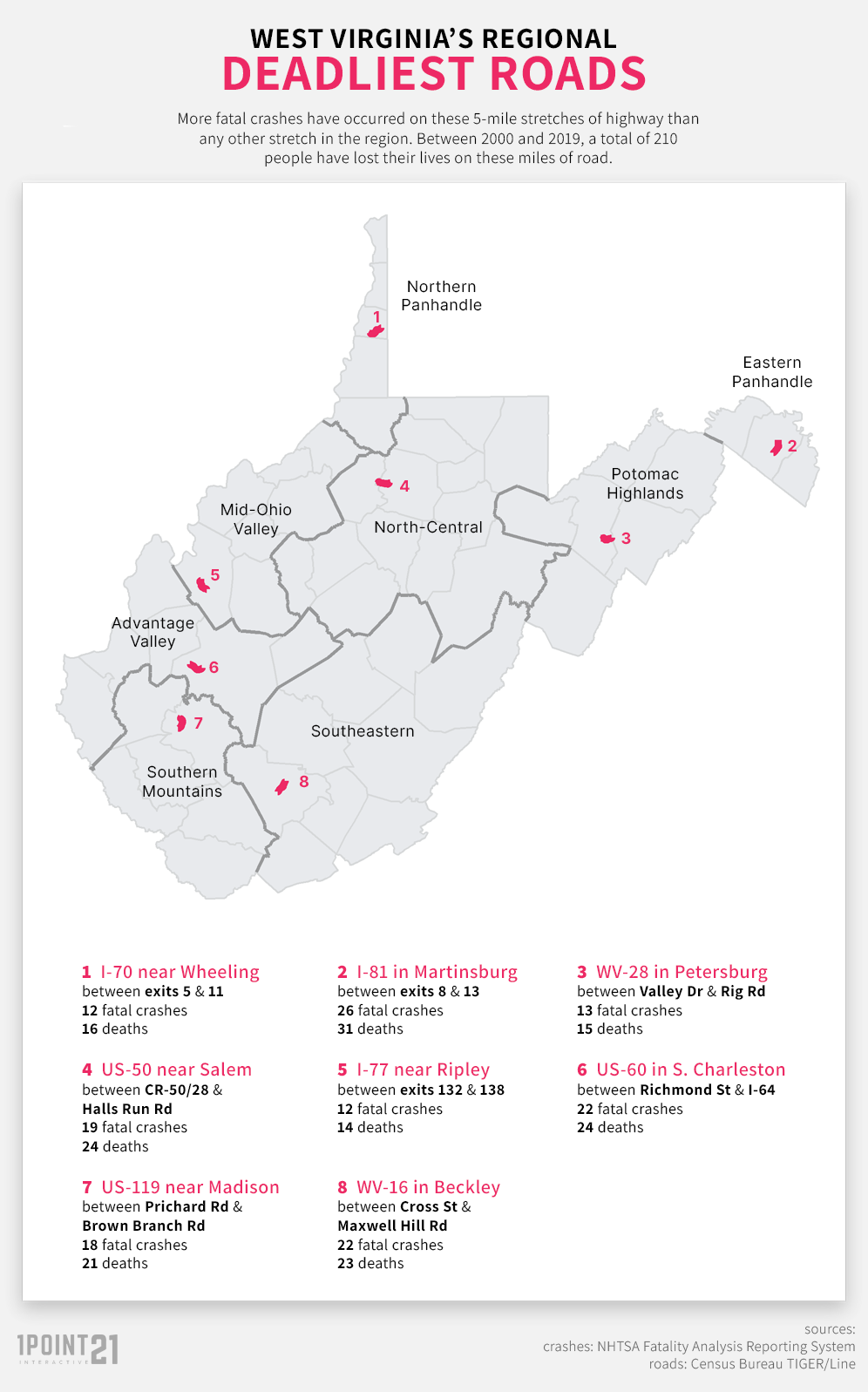 The map below shows the 12 deadliest road stretches in the state (in red), the worst in each region (in blue), and the deadliest single mile (in black).  The map is interactive, use the mouse wheel or pinch to zoom in and hover over each stretch to reveal more information.  If viewing this study on a mobile device, rotate for the best user experience.

Known as the “mountain state,” West Virginia presents certain challenges for drivers on its rough, rural roads.  This makes it especially important to drive at slower speeds – sometimes even slower than the designated speed limit, depending on worsening road or weather conditions. To stay safe, practice alertness and patience when driving on West Virginia’s deadliest stretches of road.

This study is based on 2000-2019 fatal crash data from the National Highway Traffic Safety Administration (NHTSA).

Secondary roads: Secondary roads are main arteries, usually in the U.S. Highway, State Highway or County Highway system. These roads have one or more lanes of traffic in each direction, may or may not be divided, and usually have at-grade intersections with many other roads and driveways. They often have both a local name and a route number.

If you would like to report or republish our findings, please link to this page to provide a citation for our work.