The number of drug-overdose deaths across the Tri-State area (West Virginia, Maryland, and Pennsylvania) continue to outpace the number of individuals who have died as a result of the coronavirus as of Friday, officials said.

A recent fire that demolished an abandoned house in Sabraton near Morgantown, West Virginia illustrates the added risk the drug epidemic poses for our emergency responders. 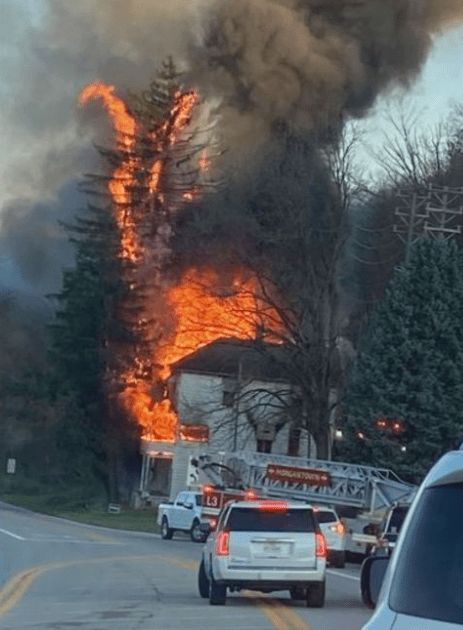 Prior to the fire, people involved in drug activity were observed going in and out of the condemned property.

For the seventh time in a year, vacant structures have been the site of suspicious fires. To date, there have been no personal injuries reported.

“When you have absentee landlords who own these properties that don’t live in the city, or in the state who don’t have local contacts to address issues with the buildings, that responsibility falls back on the city and that’s a tough job to do, there are a lot of these buildings in the area.”

According to fire chief Mark Caravosos, firefighters face many unknowns when they are called to fight a fire in a vacant building.

“The one danger I’m seeing the most of are the hypodermic needles and evidence of drug use in these structures,” Caravosos said.

Not only do firefighters have to face the dangers inherent to fighting a building engulfed in flames, but also have to crawl on the floors of the buildings through scattered, uncapped hypodermic needles in order to stay lower than the smoke and heat in the rooms.

The Sabraton fire also placed Trinty, a private Pre-K through 12th-grade school, at risk when it sparked a brush fire which covered nearly three acres just below the school property.

A mechanic’s lien has been placed on the neglected property in order to allow Monongalia county first responders and clean-up crews to be reimbursed, when the now-vacant property is sold, for expenses resulting from the fire. Insurance payouts from fire loss claims can also be a source of reimbursement for the county.

Why is There an Increase in Opioid Use and Deaths in West Virginia During the Covid-19 Pandemic?

In the early months of the pandemic, it was difficult to get into drug detox or a treatment program due to the risk of exposure to COVID-19.

Church services, recovery meetings and other opportunities for social connection were also canceled.

Recovery experts attribute the increase in overdoses, at least in part, to the loss of face-to-face substance-abuse treatment during the COVID-19 pandemic in which social-distancing guidelines have been imposed.

“(Alcoholics Anonymous) and (Narcotics Anonymous) meetings are not being held, outpatient substance-abuse treatment is not taking place.” According to Tim Czaja, director of the Berkeley County Day Report Center, “I would argue that this particular population is at far greater risk of overdose and death than the risk of COVID-19 when these community-based face-to-face meetings are not available to them.”

The social disconnection between people due to the pandemic has increased the level of secrecy available for those with substance use disorder, and it has decreased accountability to their peers. At the same time, the outbreak and social unrest have fueled anxiety and increased stress levels.

“We had an epidemic of loneliness to begin with, and the pandemic only increased that.”