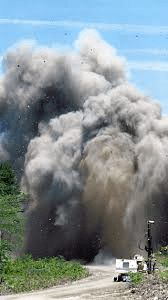 A Monongalia County has filed a lawsuit after their home was damaged by blasting work which was occurring for the construction of a new natural gas pipeline causing more than $100,000 of damage. The new gas line will run from Harrison County, through Mon County, up to Washington County, PA. This new line is designed to transport natural gas from area wells to three interstate transmission lines.

The blasting has been blamed for damaging the couple’s house, septic field, and an outbuilding. From the blasting damage cases I have handled, I have observed that basement damage and cracks in plaster, drywall, mortar joints, masonry walls, nail pops, water leaks in the foundation, and ceiling fissures are common in neighborhoods near blasting areas. Blasting activity can also cause carbon monoxide (CO) to travel through voids and utility lines into nearby homes. In this case, the couple is suing for compensatory damages including the actual damages, loss of property value, all costs, interest, and mental anguish.

Sheehan Pipeline Construction based in Oklahoma is the company named in the lawsuit. Sheehan was a subcontractor on the 150-mile M3 Appalachian gathering line. The company has been accused of using explosives in an area subject to landslides and failing to take into account cracking, slippage, and earth shifting which was likely to occur.