Posted On October 8, 2014 I Firm News,Fracking News in WV,Gas Explosion

Dominion Energy’s plan is to convert a former import facility to a liquefaction and export terminal at Cove Point, Maryland on the Chesapeake Bay. The anticipated cost of this project is 3.8 billion dollars.

In the course of the three year period of construction, more than 3,000 jobs will be created, and 75 new jobs to operate the natural gas export facility.

Hazards to workerson-site at Cove Point include risk of injury, falls, explosions, faulty equipment, and potential lack of enforcement of safety regulations to meet construction deadlines. The project must be achieved with minimal accidental occurrences, so the utmost care must be taken to prevent injuries and deaths which too often accompany the fracking and oil and natural gas industries.

What will this LNG export facility in Maryland mean for gas drillers in West Virginia?

With the creation of the first East Coast LNG export facility, West Virginia natural gas will soon have access to energy-hungry markets around the world.

Following the construction and completion of the five billion dollar Atlantic Coast Pipeline from the Clarksburg area in Harrison County, WV to Virginia and North Carolina, some of the West Virginia natural gaswill end up at the Cove Point facility where it will be converted to its liquid form and stored in tanks. Right now, seven tanks exist at the Cove point terminal. 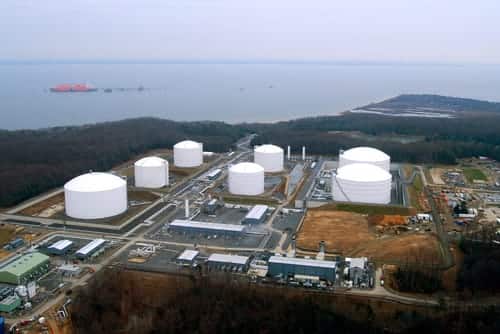 These tanks are considered single-wall storage tanks with a dike that is secondary containment. Each tank has a cryogenic inner tank – think large Thermos┬« bottle – four feet of insulation and a carbon steel outer tank. Each tank also sits inside its own dike that was engineered to hold 110 percent of its contents.

The tanks are inspected regularly to check their integrity and maintained to store LNG safely, just as any component would be. Their lifecycle is based on thermal cycling and age is not an issue. They are safe for the use of storing LNG. That said, if there was a leak, the LNG would be contained, would vaporize and dissipate into the atmosphere.

This project will have the smallest environmental impact of its kind and will preserve the thousand acre nature preserve that surrounds Cove Point. This project will also provide a new long-term stream of revenue of an additional $40 million a year for Calvert County. Last, but not least, this facility will serve to strengthen our nation’s position providing clean energy to not only our country but also to our allies.

India has signed a twenty year contract with Dominion Energy to purchase exported LNG, and the country of Japan is also expected to be a key customer for oil and gas. Ships designed to safely transport the LNG to overseas markets are now being constructed which will serve as a pipeline across the Atlantic.

Opponents argue that LNG exports will increase pollution and health risks from gas drilling, processing, and transport at home, turning our communities into industrial sacrifice zones for energy being shipped elsewhere.

Some environmentalists also fear the approval of the Cove Point export facility will provide a strong economic incentive for companies to expand fracking across Maryland, where no drilling yet occurs. In other states, the expansion of fracking has beenlinked todrinking water contamination, air pollution, illnesses and even earthquakes.